The Other Side of TiSha B’Av 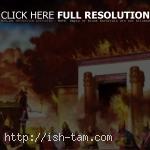 TiSha B’Av is often simplistically portrayed as the day when bad things happened to Jewish people throughout the history.  If we examine the events more carefully, we can notice that we aren’t talking simply about negative things that happen out of blue.

Tisha B’Av calamities happen on the aftermath of the tremendous opportunities we blew.

The day that gave birth to Tisha B’av, when Spies returned from Land of Canaan and brought the report that started the national hysteria
, was the day we missed the opportunity to enter and settle in the Land of Israel.

The day of the destruction of the First Beit Hamikdash by the Babylonians was preceded by hundreds of years of prophets of Israel coming and warning us to live up to the potential we had. We missed again the potential of His chosen people living in the holy land of Israel, with the Temple and G-d’s presence over entire Israel. We took it for granted instead and systematically missed the opportunity to reach our true potential, generation after generation.

The same story repeats with the Second Temple and the Romans, except the consequences are still not quite sorted out.

The story on expulsion from Spain, which deadline also came on Tisha B’av, has very interesting prelude as well. The Jewish community of Spain, being very affluent and wealthy, conducted a national congress in the summer of 1491 – a year before the expulsion. As an attempt to use this wealth for common good, an idea was suggested and enthusiastically supported to buy Land of Israel from Turkish Sultan. The congress almost moved to the practical arrangements, when a few “modest” individuals raised doubt if it’s indeed the appropriate course of actions? Who are we daring to jump-start the process of Geula? Shouldn’t we weigh it more carefully and not to rush with those plans? This intervention cooled off the enthusiasm of the participants and it was decided to postpone the decision into the congress next year.

Next summer of 1492, as we know all too well, Jews of Spain were too busy packing up complying with the royal expulsion decree.

In prophet Zecharia, chapter 8, G-d promises that all our fasts “shall become occasions for joy and gladness, happy festivals for the House of Judah” on the condition that “you must love truth and peace.” From here we can see that Tisha B’Av has two sides and contains the potential to be converted into “happy festival”, we only need to learn to “love truth and peace”, and to stop missing opportunities to create peace and harmony in Klal Israel.

The Tikun, the rectification of entire history of events filed under “Tisha B’av misfortunes”, is to learn recognizing and jumping on the amazing opportunities in life our loving Father gives us.

How to celebrate Tisha B’Av

Meditations and prayers for Tisha B’Av